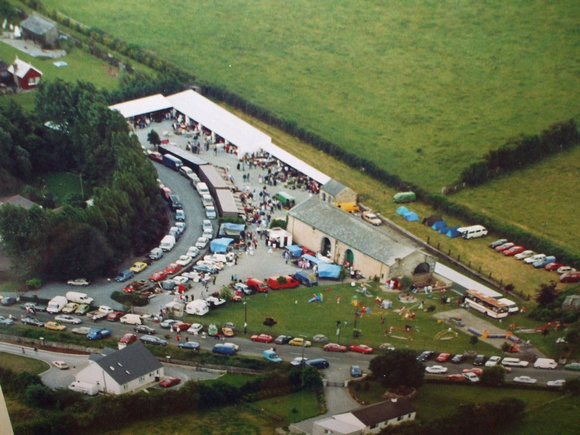 Fethard’s Folk Museum is now a top attraction. What started out as the mere satisfaction of a hobby and then developed into a centre of parochial curiosity, has now emerged to become one of Tipperary’s top tourist attractions. The Folk, Farm and Transport Museum in the town of Fethard now attracts some 10,000 visitors each year to its Cashel Road location.

The centre is the brainchild of Christy and Margaret Mullins and it opened its doors for the first time on St. Patrick’s Day of 1983. Its impact was immediate and it managed to treble its amount of visitors within the first two years of its inception.

Margaret and Christy, always interested in things old and quaint, began to travel the four provinces more than twenty years ago accumulating items of historical value. The large collection which they had gathered encouraged them to open the museum more than six years ago.

And they are adding to their collection all the while. The number of old bicycles and prams has been increased in the past few years. While an extension has been built to include toilets, Margaret admits that they are still badly stuck for space and it is hoped to expand even further.

1,200 Exhibits
More than twelve hundred exhibits are on display at the museum. The extension constructed at the rear of the building in the summer of 1984 , houses the hearses and horse-drawn carriages.

The exhibits include a large selection of old bicycles such as penny farthings, boneshakers and ladies three wheelers: Victorian perambulators, cameras, laundry equipment and everyday household items used over a century ago.

When they opened the museum the Mullin’s took over the 106 year old railway goods store on the Cashel Road. The store is situated beside the family residence on the Cashel road and Christy has the last passenger used on the train in his possession.

Hard Going At First
The couple found it very hard going in the beginning and it was some time before they availed of the assistance of the various tourist bodies to promote their unique venture. The county development team and Bord Failte began to take an active interest in its fortunes, and soon the Mullins Family began to reap the fruits of their involvement.

The museum occupies a coveted place in brochures and guides to the South Tipperary. Bord Failte provided the sign to the museum and there are a number of fingerpost signs located at prime vintage points all over the county to try and divert people through Fethard.

Bord Failte advises tourists to visit the Folk, Farm and Transport Museum as part of their tour of the region which would also include Cahir Castle, the Rock of Cashel and Kilkenny Castle.

From All Over
They come literally all over the world to visit the museum. Visitors call from the United States, Germany, France and from all over Europe. Margaret is full of praise for South Tipp. County Council and Bord Failte for their promotion of the facility.

The museum presents an ideal opportunity for the family to enjoy a day out during the spring and summer. It places a particular emphasis on trying to attract children for educational benefits and school tours visit from as far away as Galway and Kerry.

Christy and Margaret have been propositioned on numerous occasions by American tourists occasions by American Tourists anxious to take back a number of the exhibits as souvenirs. In the early days of the museum they were almost tempted to let things go – when success wasn’t going their way.
Christy, however, is opposed to leaving anything of Irish heritage out of the county and the offers were resisted.

Unique Bicycles
The collection of antique bicycles receives a lot of attention and they are of particular interest to Christy who has stopped at nothing to add to them. They receive several requests to bring the bikes to fancy dress shows, carnivals and various other functions all over the country. The penny farthings, boneshakers and ladies three-wheelers were discovered in such locations as Carlow, Kilkenny and Mount Melleray.

Being the compulsive collector that he is Christy travelled west to Galway a few years ago in an effort to acquire an old bicycle. He was beaten to the bid by a foreign visitor. While the experience disappointed him he continues the search undeterred.

Christy and Margaret would like people to donate any object that they don’t particularly want to hang on to and which would merit a place in the museum. They are very grateful to all those who have made donations over the years, and say that only for them the museum would not be open.

Lord Donoughmore’s Pram Included
The old jockey scales used at the now defunct Cashel racecourse attracts considerable attention, as do the washing machines from 1890. Lord Donoughmore’s pram is included among the huge collection.

Margaret’s family, who also donated a large number of old household utensils and implements, provided the encouragement for the idea and supported the couple in early years.

Christopher (junior) and Marina take an active interest in the running of the museum and they participate in the summer tours. Christopher cleans and polishes the exhibits to make sure they are in pristine condition.